Welcome back to LCI Labs! Larry here, I wanted to tell you a little story about the beginning of my year. We all know about Covid and as if that wasn’t horrible enough, my trusty 22 inch Cintiq quit on me. Actually the damn thing stopped working. It was an older model so it was understandable but it l left me in quite a spot. It was an integral part of my work flow. So after I curled up into a ball for 15 minutes and downed a bottle of real good wine, I picked myself up and hit the internet to find a solution in the middle of a pandemic.

My first stop was the Wacom website. Look at all the pretty toys! Folks, it was heart stopping. Now, I had a 16 inch Cintiq that I use for working in libraries and coffee shops but I was really missing all that screen real estate but thank goodness I had it. Anyway, I checked the prices and they were about what I expected. At this point I was warming up the ole’ credit card when a small still voice from inside me whispered “Check Amazon first…” I don’t know what I was thinking because the prices for Cintiq’s would be just about the same there but I decided to check them out anyway.

While I was looking I started browsing Amazon’s suggested products and saw a whole host of other display tablets. One of them was the Gaomon PD 2200! How bad could it be? Amazon doesn’t choose crappy product for its Amazon’s Choice products and this thing was under $500.00! I was getting ready to drop at least 3x that on a new Cintiq of that size (21.5 inches). I figured, what the hell? I could always return it if it was a piece of junk.

At this point my analytical brain kicked in and said “Check the specs. There’s a reason it’s that cheap.” So, I looked at them both and compared the Gaomon PD 2200 to the Cintiq I was going to buy. Comparable! Both display 16.7 million colors. Both are 21.5 (the Cintiq was 22) inches. They even have the same aspect ratio but the price difference is ridiculous! Here are the full specs from Amazon: 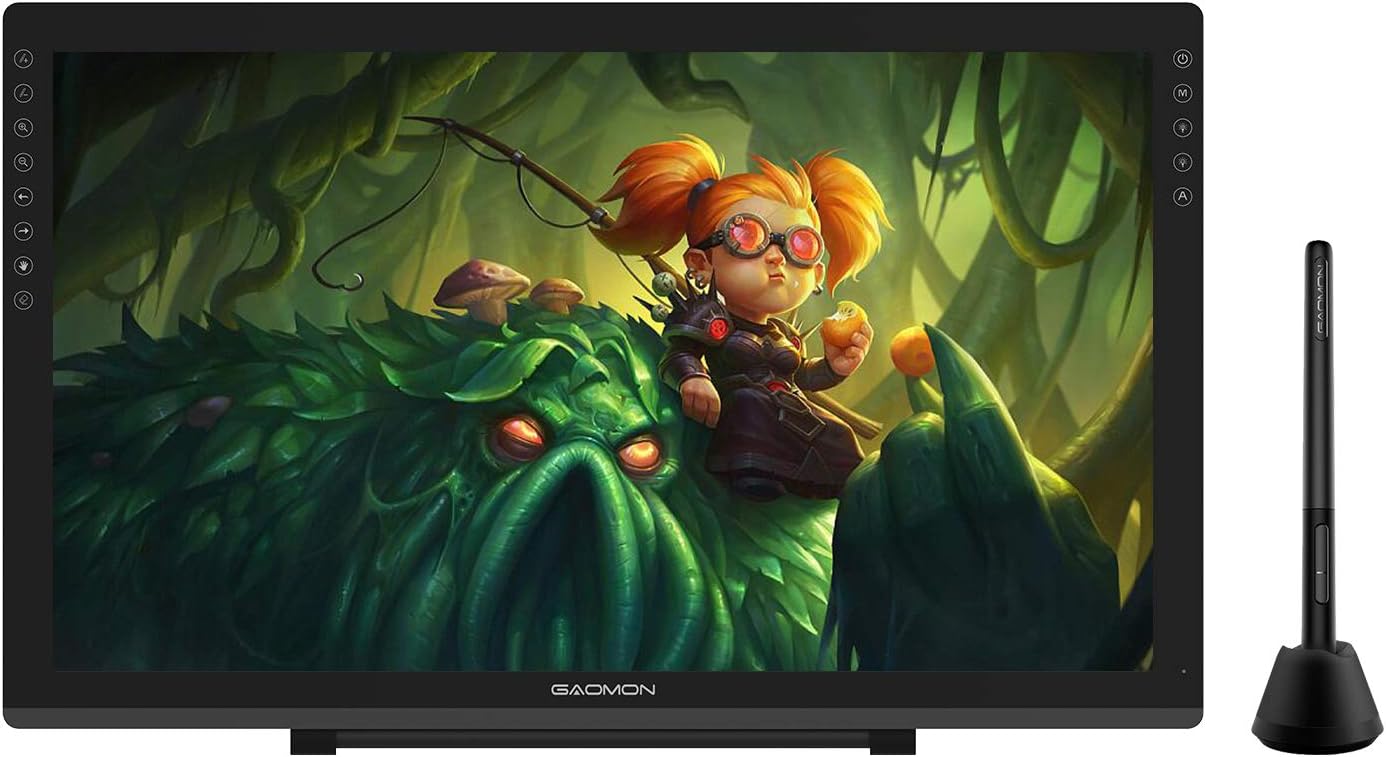 So, long story short I ordered the thing. Full disclosure, I really was not expecting much. I was a Cintiq guy. I was on my second one. However, when I bought my first one they were the only game in town. Cintiq’s had no competition at the time and if you had one you where cool! Anyway, I pulled the trigger and ordered the Gaomon. Because of the pandemic it took a few days to get here and when it did I treated it like it was made of plutonium. It sat in a corner of my kitchen by the side door for 2 weeks. I was taking no chances folks! Eventually, I set the thing up (I took an alcohol bath afterwards. Things were hectic back then) and decided to put it through its paces.

When I pulled it out of the box the first thing I noticed was the build quality. It didn’t feel or look cheap. Solid. Good stand. I had been using the Cintiq on this arm, the Ergotron 45-241-026 Mounting Arm for Flat Panel Display (which is awesome by the way) but when my Cintiq took a dirt nap I replaced it with the Samsung 23.6 inch FHD 1920x1080 Desktop Monitor for Business that I also picked up on Amazon (man they were really in pockets that month). My desk which is actually a drawing table allowed me to set the Gaomon right in front of me and still have room for my Apple wireless keyboard, which I think is a nice set up. So, once I got the thing set up with my iMac (surprisingly painless) and installed the drivers (which you download from the Gaomon site) the thing fired right up.

Now, the second thing I noticed was the laminated screen. It has a bit of texture to it that makes drawing on it feel like you’re drawing on paper. Very familiar. I really liked that. Especially with the pen that’s included with the display. It’s light, balanced well and doesn’t come with a stupid battery that you have to recharge. The little base it comes with even has a number of extra nibs in it although, I haven’t had to change mine yet. Now, if you’re used to that slick, “drawing on glass” feel, it may take some getting used to but I think it’s great (cause I’m an old fart that started the first half of my career drawing on bark with a burnt stick). Next, I checked for any lag when making a stroke. I was pleasantly surprised, there was none. The pressure sensitivity is great too. 8192 levels!

So far so good right? Wrong. I have to give you some medicine to go down with the spoonful of honey. The color was way off. Perhaps if I was looking at the Gaomon alone it would look fine but I have a 3 monitor set up and it was off when compared to my other 2. So, I headed to the Gaomon website and their user manual. I cracked that sucker open and learned how to adjust the color balance and in about 15 minutes or so, all was right with the world (after I learned how to use all the buttons on the thing). Let that be a lesson kids! Read, read, read the instructions!

Ready for the happy ending? I have been using the Gaomon PD 2200 steadily since I picked it up. In fact, I completed a book for a major publisher with it as well as work for a professional sports team you’re probably familiar with. It’s been happily chugging along without an issue. Now, is the Gaomon just as good as my old Cintiq? No, it isn’t but it is nipping at its heels. Give Gaomon a little more time in the industry and that could very easily become a different story. That said, I’m happy with the 2200!

In closing, if you don’t want to break the bank and you need a fairly large pen display for digital art, the Gaomon PD 2200 is a good choice. They may be the new kid on the block but they’re growing up fast!

Check it out on Amazon.

Well, that’s it for this week. Join us next time when we’ll be taking a look at the infamous iPad Pro. Is it worth the loot? We’ll find out!